Wine, often described, as the ‘nectar of the gods’ is a much-loved beverage. France is widely acknowledged to be the home of wine. The country is the world’s largest producer of wine, followed by Italy and Spain. The wines that hail from these established European countries bear the classification of ‘Old World Wines’.

However, nowadays, aside from Europe, wine is produced in various other countries around the world. Countries like the USA, Argentina, South Africa, Australia and even China produce significant amount of wine and the wines made by these countries are fittingly called ‘New World Wines.’

Regardless of where wine is produced, it is fêted around the world. These wine-themed events attract hordes of wine enthusiasts, some of whom travel great distances to be present at these fetes.  Listed below are some popular wine festivals, which if you love wine should pencil in for your travel bucket list. Wine has been a part of Austria's heritage for centuries. Wine growers based around the Austrian capital city of Vienna have been producing and selling wine since the Middle Ages. Currently, more 630 producers practice their craft in the lush vineyards that dot 1680 verdant acres around the city.  White grapes like the native Grüner Veltliner along with Reisling and Chardonnay make up much of the harvest. Visitors can access these vineyards by tram or then on foot, but they often need to make an appointment before they can get access to the vineyard. However, every year for one day in autumn the Vienna Wine Hiking Trail is open to the public. During this annual celebration, visitors can visit the many vineyards around Vienna to sample the wines and soak in some gorgeous views of the lush countryside.

India has in recent years joined the wine-growing club. The city of Nashik, in the western Indian state of Maharashtra, is the wine capital of India. One of the best-known Indian vineyards belonging to Sula Wines is located here. Every February, the vineyard throws open its gates and hosts a well-attended festival over a weekend called Sula Fest. Sula Fest features music, fashion, gourmet eats and the entire repertoire of Sula wines.  Festivalgoers usually stay over for both days of the festival as they camp on the grounds of the winery or stay at hotels located close to the vineyard.

Wine is grown in almost every region in France. Bordeaux, a port city on the River Garonne in South Western France, is perhaps the most famous wine destination in France.  Located within Bordeaux are some of the most renowned growers of wine like Chateau Lafite-Rothschild, Chateau Latour, Chateau Margaux and many others. The town of Bordeaux hosts a mega wine tourism event every two years. Scheduled for the summer season, the Bordeaux Fete de Vin is a celebration of wine, food, and culture.

Extending over twelve acres in Bordeaux on the banks of the Garonne, the festival features eighty pavilions offering samplings of wines from Bordeaux and the Aquitaine regions along with culinary treats and cultural events.  Approximately 300,000 wine lovers make it a point to attend the festival, which spans four days.

The region of Jura situated between Burgundy and Switzerland, in the western foothills of the low Jura mountain range in Eastern France is the smallest wine-growing region of France. This little enclave stretches from the town of Arbois to Lons Le Saunier, and it produces a few distinctive wines under five appellations. The wines of Jura have a cult following and each year the region celebrates a grand wine festival called La Percée du Vin Jaune which takes place over the first weekend in February. The event marks the release of the latest vintage of vin jaune; a wine, which is processed like a sherry. The festival annually attracts 50,000 wine enthusiasts and features wine tastings, auctions of notable wines, processions, and ceremonies. The festival is held in a different town or village of the region every year.

The spa town of Bad Dürkheim located in the district of the same name sits on the eastern edge of the Rhineland-Palatinate region. The German Wine Road, a picturesque road traverses through the district as it borders some of the best vineyards in the Palatinate region. The Mittelhaardt area of the region is renowned for its excellent Riesling hence it’s hardly surprising that the town of Bad Dürkheim each year hosts one of the largest wine festivals in the world, the Dürkheimer Wurstmarkt. 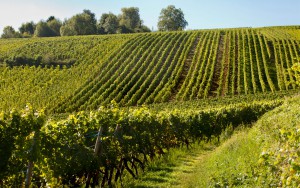 The festival spans nine days and showcases the award-winning wines and sparkling wines at its wine village and festival tents. Other events include a beauty pageant to choose the Bad Dürkheim Wine Princess, live music, rides and theme nights. The festival is held in September each year and attracts more than 600,000 wine lovers from around the world.

Wine festivals are rather civilized affairs the world over. However, the wine festival in the town of Haro situated in the Spanish wine region of La Rioja in the northern half of the country is a rough and tumble, raucous affair. Slated for the last weekend in the month of June each year, the festival takes the form of a rowdy wine-fight. The event, which is known as La Batalla de Vino de Haro starts off with a grand street party on the evening of 28th June. The next morning the revelers head to the top of a mountain located 5kms away. Once at the summit of the peak, the party resumes as the merrymakers douse each other with wine procured from water trucks filled with wine. Buckets of wine, wine-filled water pistols, and wine barrels all feature prominently in this mother of all battles.