The Factory of the World – China’s Most Business-Friendly Cities

Over the last three decades, China has emerged as an economic powerhouse that accounts for a significant portion of the world’s manufacturing. Known as the factory of the world, many global businesses have moved their production to China to take advantage of cost savings, so the country has become a prominent hub for business travelers from the world over.

China is a vast country, and there are many centers of economic activity towards where business and associated business travel gravitates. Listed below are some of the most business-friendly cities in China.

Shanghai
Shanghai is the biggest and the most populous city in China. The city enjoys an enormous location advantage as it stands on the mouth of the Yangtze River. This strategic location has enabled Shanghai to become the biggest container port in China and a prominent global shipping hub. Shanghai has a well-developed transport network, and is easily accessible by air, road, and rail. The city is also home to the Shanghai Free Trade Zone which is very investor and business-friendly.

The city is a significant conference and trade-show center that hosts events like the Shanghai International Auto Show and the entertainment and digital expo ChinaJoy, both of which attract hordes of business folk to the city. As a result, Shanghai has a well-established hospitality sector which features the presence of the world’s leading hotel brands, restaurants, and cafes. All these factors make Shanghai one of the most business-friendly cities in China.

Shenzhen
Shenzhen, a bustling city, located a mere twenty miles from Hong Kong is one of the several special economic zones in China. China set up these special economic zones in the early 1980s when it embarked on a program of economic reforms and opened its doors to international trade. Today, Shenzhen is one of the four first-tier cities of China which is a prominent foreign trade hub and the third busiest container port in the world.

The city, like Shanghai, encourages innovation and business and is home to industrial design parks and special economic zones that offer incentives and advantages to industries like finance, technology, logistics, and IT. The QianHai Industrial Zone, the Shenzhen software park, and the Shenzhen high-tech industrial park offer a favorable business operating environment to industries such as software, pharmaceuticals, and chemical production, biotechnology, electronics, construction materials production and more.

In fact, Shenzhen is known as the ‘Silicon Valley of China’ for it is home to well-known Chinese technology companies such as Tencent, Huawei, and DJI (the drone manufacturing company) amongst many others. Additionally, the city is equipped with an international airport and has an excellent public transport system along with several modern facilities such as hotels, shopping malls, lush parks, and a large resident expat population.

Beijing
Beijing is China’s ancient capital city which today is home to more than twenty-one million residents. The city is an immensely popular spot on the tourist trail owing to its many ancient historical sites. However, in recent years Beijing has transformed into a technologically-savvy business center, home to some of the world’s largest, most profitable companies.

The city also has the essential infrastructure for modern day business such as excellent internet speeds, widely-used facial recognition technology, and digital payments. Additionally, the city authorities have also introduced various measures to encourage foreign investment and business to set up shop in Beijing. 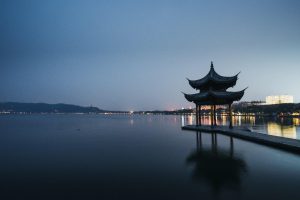 Hangzhou
Hangzhou, the capital of the Zhejiang province, is located to the south of Shanghai. The city has in recent years come to be known as the capital of e-commerce in China as it is the home city of one of the largest e-commerce companies in the world, Alibaba. The city offers preferential treatment and tax breaks for e-commerce companies, start-ups, and hi-tech firms. Other industries that have a prominent presence in Hangzhou include biotechnology, food and beverage manufacturing, and equipment manufacturing.

Wuhan
Wuhan, a big metropolis in Central China is another major hub of economic activity in China. Formerly, Wuhan, which lies 750 miles to the west of Shanghai on the Yangtze River, was a major center for manufacturing. However, in recent years the city has transformed itself into a science and technological hub with several science parks and research and development institutes.

The city’s central location and well-developed transport network helps it to function as a critical player in the movement of goods from various other parts of the country. Biotechnology, automobiles, aviation, environmental protection, and steel processing are some of the other industries which feature prominently on Wuhan’s landscape.

All this business activity has helped the rapid urbanization of Wuhan, and the city boasts a new metro system and a new shopping drag, Han Street, that extends for miles and hosts many well-known western brands.

Guangzhou
Guangzhou, the capital city of the Guangdong province, is the third largest city in China and an ancient port city located on the Pearl River Delta. The city served as China’s maritime link to the Silk Road and over the years grew to be a significant manufacturing and tech hub.

The city is also home of the famous Canton Fair, the gargantuan China Import and Export fair which has been attracting business folk to the city’s shores since 1957. The trade show is held twice annually during spring and fall.

All this economic activity has dramatically helped the growth and development of Guangzhou, and the city today boasts the best-known hotel brands and many trendy and chic restaurants, bars, and cafes.

The architectural landscape in this ancient city features a mélange of old, classical buildings featuring a variety of styles from Gothic to neoclassical and baroque which stand alongside modern, sparkling glass towers like the Canton Tower, the International Finance Centre, the Guangdong Museum, and the Zaha Hadid designed Guangzhou Library.

The city additionally is known for its exceptional Cantonese cuisine and its buzzing street markets, all factors that make Guangzhou a hot favorite with business travelers to China.

Book Now to China
With daily flights to China, Fare Buzz travel specialists can find a discounted fare that matches your travel needs and budget.